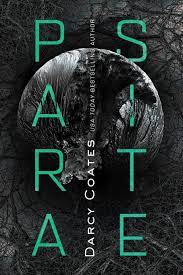 Parasite is the second novel I’ve read by author Darcy Coates. With this novel (which is actually five short stories/novellas tied together by an alien invasion throughout a distant human-populated system united under an entity called Control), Coates takes on military sci-fi horror. The reader may recognize the strong influence of John Carpenter’s The Thing. The parasites of the title appear as black, tarry creatures with thrashing, writhing, reaching tentacles. When they attack, they force their way into their human prey and assume the prey’s outward form while retaining their memories, as well. The significant threat is that once the parasite infects a host, that host is able to pass among other humans without notice. The parasites’ third form taken uses their host humans as appendages of sorts. They require the bodies of their hosts to see and communicate with their prey. The sight is, of course, distressing for humans and serves as another method of applying terror and intimidation.

Darcy Coates, writing from her native Australia, began her career as a self-published novelist. After penning approximately half a dozen novels, she garnered the attention of a proper publisher. This alliance has propelled her work to the attention of a wider audience, and she has since gained increasing popularity in the States. The majority of her stories take the form of gothic, haunted house romances. Within that genre, she writes with confidence and her narrative voice fits those types of stories. I applaud her for stepping outside her comfort zone. I’ve attended a virtual Q&A with her, and she comes across as quite genuine and humble, and she knows her craft. The fault with Parasite, though readable as a light and fun action story, is it lacks the proper world-building of this particular genre. The novel could just as well have taken place on earth. The reader feels little to no threat from the violence of space. There is no sense of the vastness of the cosmos. And it lacks the grit one would expect from a quasi-military sci-fi novel. I wouldn’t have expected the tactical depth and jargon of a Starship Troopers, but the abundant lack of such details brought me too often out of the story.

I would not dissuade any reader from exploring Coates’ work. Simply stated, this particular novel did not quite satisfy me and I consider it a lesser example of the typical quality of her work.

On a Storyteller’s Night

What’s Past is Prologue